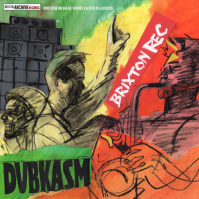 Limited to 500 Copies on Green Vinyl. Leading lights in the 21st century UK digi dub / roots scene Dubkasm have built themselves a worldwide following for their brand of reggae since launching their own Sufferah's Choice label in 2003. What many fans may not realise is that even before that first Sufferah's Choice release, Dubkasm had nearly a decade's worth of recordings behind them. Unfortunately, other than a track on the 1996 Dub But West Volume Two compilation album, those early recordings were the preserve of leading UK sound systems such as Aba Shanti and Jah Shaka and could only be heard played off dub plates at dances. Dubkasm have finally decided that the time is right to share the story of those early years and make a selection of those formerly exclusive tracks available for everyone to enjoy. Bristol Archive Records take the story of reggae in the city forward into the 1990s with this essential and previously unreleased selection. complete with sleeve notes, telling the story of Dubkasm's early years including rare archive photos.