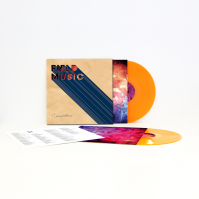 Commontime is the first album of new songs from North East siblings Peter and David Brewis since Plumb in 2012 and their fifth album 'proper' since their debut in 2005. After four years threading a way through one extra-curricular project after another, the space that Field Music vacated still appears to be empty and Field Music-shaped. No one else really does what Field Music do; the interweaving vocals, the rhythmic gear changes, the slightly off-chords, but with the sensibility that keeps them within touching distance of pop music.

All this is present again but things are different this time. Where Plumb was an album of vignettes and segues, Commontime edges towards what people might call “proper songs”. Field Music have never shown off their unashamed love of choruses quite like they do on this record. Lyrically, Peter and David continue to mine that inexhaustible seam wondering how on earth we ended up here, in this situation, as these people. Over fourteen songs, conversations are replayed and friendships are left to drift. And all the while, that thing you were trying to remember has changed while your head was turned.