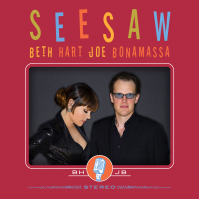 Much buzzed about singer-songwriter Beth Hart, known for her raw and powerful blues-rock sound, and guitarist Joe Bonamassa, one of the best guitarists of his generation, will release their sophomore album of classic soul covers Seesaw on May 21, 2013 via J&R Adventures, and May 20 in Europe via Mascot Records. Produced by Kevin Shirley (Joe Bonamassa, Led Zeppelin, Black Crowes), the album features Hart’s scorching interpretations of eleven songs, with Bonamassa on guitar and an all-star band filling out the tracks. It was recorded in January 2013 at Revolver Studios in Thousand Oaks, CA and The Cave in Malibu, CA. The duo will play a select run of live shows in Europe in June, with two Amsterdam dates at Carre Theatre being filmed for a future DVD release.

A force of nature with powerhouse vocals, Hart has been in the spotlight since her show-stopping set with Jeff Beck on the 2012 Kennedy Center Honors to pay tribute to blues legend Buddy Guy. The duo received a rare, non-honoree standing ovation when they played “I’d Rather Go Blind” – a song she and Bonamassa originally covered together on Don’t Explain – which the Baltimore Sun called a “soul-searing performance.” Hart reunited with Beck onstage at last week’s Eric Clapton’s Crossroads Guitar Festival, which featured blues and guitar greats like Albert Lee, Taj Mahal, B.B. King, Sonny Landreth, Keith Urban, Keb’ Mo’, and John Mayer. Together they performed Howlin’ Wolf’s “I Ain’t Superstitious” and the Beck/Stevie Ray Vaughan-penned “Goin’ Down.”

Seesaw is the follow up to 2011’s Don’t Explain, on which Slant called Hart “a simply peerless frontwoman;” AllMusic.com said “Bonamassa and band accent her every phrase with requisite rowdiness, sting and grit.” About.com called the duo “a match made in Heaven” and MOJO praised their ”potent musical chemistry.” The album was nominated for a 2012 Blues Music Award.

Seesaw opens with a joyous horn reveille to kick off “Them There Eyes,” made famous in 1939 by Billie Holiday—one of Hart’s biggest inspirations. “My mother turned me on to this song when I was a kid,” says Beth. “I love the bubbliness. It’s sexy, it’s fun, and it has a great swing to it.” On the track “Nutbush City Limits,” Hart wails with an intensity that would make Tina Turner proud, and her slow and soulful burn on “I Love You More Than You’ll Ever Know” pairs dramatically with Bonamassa’s smoking guitar. The tempo kicks up several notches with Hart’s tight, rocking vocals on “Can’t Let Go,” from Lucinda Williams’ Grammy-winning 1998 album Car Wheels On A Gravel Road. It’s followed by her fierce cover of “Miss Lady,” the Buddy Miles song that was originally produced by Jimi Hendrix. Hart revisits Melody Gardot’s songbook to deliver a sultry, jazzy rendition of “If I Tell You I Love You.” “See Saw,” is a Don Covay/Steve Cropper composition from Aretha Franklin’s 1968 album Aretha Now. The album closes with Hart’s haunting and atmospheric version of “Strange Fruit,” a song that began as a poem about American racism—and lynching—by Abel Meeropol.

To back Hart up, Bonamassa assembled the band that was heard on his #1 Blues album The Ballad of John Henry (2009) and on Don’t Explain: Anton Fig (drums, percussion), Blondie Chaplin (guitar), and Carmine Rojas (bass), as well as Arlan Schierbaum (keyboards). Lenny Castro plays percussion and Michael Rhodes plays bass on the track “I’ll Love You More Than You’ll Ever Know.” Collectively, they have performed with hundreds of artists including Rod Stewart, Tina Turner, David Bowie, The Beach Boys, Elton John, Stevie Wonder, Red Hot Chili Peppers, Kiss, and the CBS Orchestra on Late Night with David Letterman.