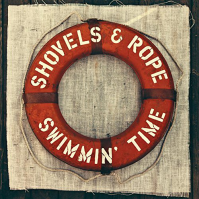 There's no backing off or backing down on Swimmin' Time, the duo's highly anticipated sophomore set as Shovels & Rope, an album that brims with the confidence, energy and sinew of a band that's accustomed to treating their career as a marathon, rather than a sprint. The album, recorded at the studio Michael Trent constructed in the couple's home, finds them cutting a new path through the sonic thickets they navigated so nimbly on their breakthrough bow, O' Be Joyful – a disc that won rave reviews from outlets like Mojo (which called it "thrilling") and Filter, which said "[they] were solid singer-songwriters on their own, but this is truly a thing of magic."