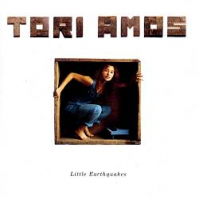 One of the most successful and influential artists of her generation, Tori Amos is as much a force to be reckoned with today as when she released her first solo album Little Earthquakes over 2 decades ago. Eschewing the trends of the time, the prodigious chanteuse touched millions deeply with her arresting melodies, riveting stage presence and personal & honest lyrics.

Amos has sold over 12 million albums, played over a thousand shows and has had multiple Grammy nominations. She is renowned for her passionate and broad fan-base, her critically and commercially successful tours, and her ever evolving live show.

Newly re-mastered and paired with an entire disc of rare B-sides and bonus tracks, Little Earthquakes is being reissued as a Deluxe Edition. The album was a massive success, selling 2 million copies in the US alone. The bonus material showcases Amos’ innate ability to reinvent popular songs, perhaps the most notable being Nirvana’s “Smells Like Teen Spirit,” a masterpiece study in understatement.