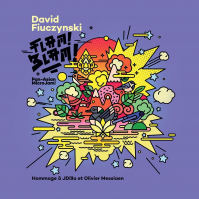 David Fiuczynski opened the Pandora's Box on non-Western tuning on his 2012 RareNoise Records debut, Planet MicroJam. He pushes the envelope even further on his latest microtonal project, FLAM! BLAM! PAN-ASIAN MICROJAM! Jointly dedicated to 20th century classical composer Olivier Messiaen and innovative hip-hop record producer J Dilla, this ambitious venture has the guitarist-composer pursuing his passion for the notes that fall between the cracks with his intrepid microtonal crew. The seven movements that comprise FLAM!, instigated by Fiuczynski receiving a 2011 Guggenheim Fellowship, show the connections between exotic bird calls and J Dilla's famous flam beats while also referencing the colors of Messiaen's music, Gagaku, the ancient court music of Japan, and other Pan-Asian ingredients. The three extra tracks that comprise BLAM! Feature special guest Rudresh Mahanthappa on alto saxophone. Fiuczynski is joined on both portions of his latest release by former Microjam Institute students Utar Artun on microtonal keyboard, Yazhi Guo on suona (Chinese oboe) and percussion, Helen Sherrah-Davies on violin, Jack Sherman on microtonal keyboard, Justin Schornstein on bass and Alex Bailey on drums. On the opening Loon-y Tunes, he employed the calls of the Common Loon and the Carolina Chickadee, then transposed the calls note-for-note onto fretless guitar, violin and microtonal keyboard. Pan-Asian aspects come into play in Fiuczynski's Indianflavored slide guitar solo on this first track. The call of the Northern Nightingale is used on Flam while Q&A Solitaire, a stunning showcase for violinist Sherrah-Davies, employs the call of the Blackfaced Solitaire. Oiseaux JDillique incorporates JDilla's flam beats, Pan-Asian motifs and the call of the Nightingale while Gagaku Chord Candy, which contains elements of free jazz, has Fuze emulating an ancient Gagaku orchestra on his fretless guitar while utilizing some of Messiaen's chords. And the final piece of FLAM!, Waldstimmen ( Forest Voices ) reprises all the bird calls together for a fitting conclusion. The three additional tracks feature fire-breathing saxophonist Mahanthappa on Uira Happy Jam, which is entirely based on the song of that sonorous Brazilian bird, the spare Organ Wren, and the intense closer Loon-ly Solitaire, which has Fuze screaming with distortion-laced delight on his fretless guitar. 'The connecting tissue on all these tunes is flam,' he explains. 'It's in the melodies, in the J Dilla beats, in the bird calls. Even the sound of the word chirp is a flam, which is basically the sound of two hits in succession close together. That's what connects it all. Why I connected those three disparate things? That's the artistic thing. I just thought it would be groovy.