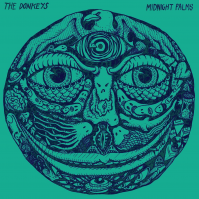 As we watched The Donkeys perform one of the first of their nearly 150 shows in support of 2014's 'Ride The Black Wave', on the clattery rooftop stage of the aptly named SXSW venue Cheers Shot Bar, Craig Finn (he of literate-rock luminaries The Hold Steady) turned to me and said something on the order of "you can just feel that they've played with each other since high school...they've got that thing, and you just can't get it otherwise". That thing, an elusive, intuitive musical hive-mindedness informs every note the acclaimed San Diego quartet ever play, live or on record, but is especially present on this mini-album 'Midnight Palms'. Tracked largely live-in-the-studio with veteran producer, longtime friend and fellow traveller Thom Monahan (Vetiver, Fruit Bats, Devendra Banhart), 'Midnight Palms' oozes with the sticky, syrupy energy of a band fresh off the road and "in rare form", as the expression goes. Recorded at the end of one of the band's blitzkrieg road runs (which might see the band playing as many as 28 shows in 29 days), the collection's lived-in live feel should surprise few. The core founding trio of Tim Denardo, Anthony Lukens and Sam Sprague drive the proceedings. Drummer Sprague alternately (and effortlessly) sets a lock-step driving pace, as on album opener 'Hurt Somebody,' a bouncy girl-group groove ('Day by Day'), or a lazy gallop, as on the languid 'Star Bird', which the drummer also sings. Meanwhile, bassist Denardo falls easily into any of those pockets, and takes his own lead vocal turn on 'Down the Line', a dusty roots-pop tune as laid back as the men playing it. Lukens, of course, provides the by turns warm, slippery, punchy and liquid keyboard lines that are the album's bedrock, while lending his direct, earnest vocals to three of the album's five tunes. The fourth Donkey on Midnight Palms is The Hold Steady's Steve Selvidge, stepping in after the (amicable) departure of long-time guitarist Jesse Gulati. Selvidge hopped on stage with The Donkeys that night at Cheers Shot Bar and would end up joining the band for a fair number of those 150 RTBW shows. His pointed, tasteful leads are peppered throughout 'Midnight Palms', most notably on the searing 'Hold On To You'. In all, The Donkeys have crafted in this 'Midnight Palms' mini- album a fine, half-sized document of their singular sound. At once accessible, adventurous, nostalgic, and progressive, it can only be The Donkeys.