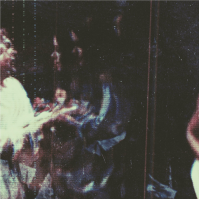 Lusts announce the release of their debut album, ‘Illuminations’, released on 1965 Records. Produced by MJ from Hookworms in his Leeds studio the album combines distorted organs and synths with fuzz guitars and driving choruses of “uplifting misery.” Lusts are brothers Andy and James Stone from Leicester, evoking both the classic woozy choruses and reverb laden guitars of Echo And The Bunnymen and the new wave pop sensibilities of Beach Fossils. LP includes a copy of the album on CD.