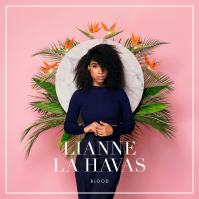 Blood is an album that was inspired by Lianne’s family heritage, which is part Jamaican and part Greek. Once touring for her debut album came to a close, she headed to Jamaica with her mother for a holiday which evolved into an experience of self-discovery. Lianne enjoyed emotional reunions with long-lost relatives; embraced Kingston’s clubs; and even jammed in front of her family for the first time during a session with legendary dancehall / reggae producer Stephen McGregor.

Discovering her heritage inspired Lianne to reflect on the connections between now and then, which in turn sparked the songs which would become her future. Simply, “everything seemed to have a lot more clarity, and I really wanted to speak about it.”

Lyrically, the songs that feature on the album are almost all related to “the feeling of who you are and where you come from.” Sonically, Blood is a collection that shakes, shimmies and swings with Jamaican grooves with Lianne taking inspiration from the nation’s love of grooves, rhythms and syncopation.

In addition to Stephen McGregor, Blood features a rich collection of collaborators. Produced by Adele / FKA twigs collaborator Paul Epworth and founded upon an instrumental recording by Ninja Tunes trio The Invisible, the first single ‘Unstoppable’ is a song that Lianne wrote to help to repair a relationship that she had ended.

Following his work on Lianne’s debut album, Aqualung’s Matt Hales returns, most notably on ‘Wonderful’ which he and Lianne co-wrote with Disclosure’s Howard Lawrence. Another highlight comes with the autobiographical album centrepiece ‘Green and Gold’ which was co-produced and co-written by Jamie Lidell, while Alicia Keys and India.Arie producer Mark Batson also lent his talents to the album.