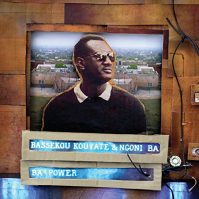 Bassekou Kouyaté & Ngoni Ba’s fourth album Ba Power (and his first for Glitterbeat Records) is a striking, career defining record marked by mesmerizing songs, razor-sharp riffs and full-throttle emotions. Following two years of worldwide touring for the much heralded Jama Ko album, Bassekou’s band, Ngoni Ba, has turned up the volume and dynamics significantly and Bassekou’s masterful ngoni playing has achieved a new level of intensity that can only be called: afro-rock. Distortion and wah wah and propulsive rhythms are now the defining backbone of his songs and the heat lightning vocals of his wife Amy Sacko, more than ever serve as the passionate and perfect foil. This is not the same Ngoni Ba. This is indeed: Ba Power.

When asked what Ba Power means to him, Bassekou told us: "Ba", in Bambara means "strong" or "great" and it also means "group.” I called the album Ba Power because I think the messages on it are very important and strong, and it is also definitely the album with the toughest sound I've ever made. I want these songs to grab as many people as possible.”

In the last decade, Bassekou has firmly established himself as not only one of Mali’s, but as one of Africa’s premier global artists. A veteran of hundreds of worldwide concerts including major festival appearances at Glastonbury, Roskilde and WOMAD, Bassekou has also garnered a lengthy list of critical accolades. His debut album Segu Blue (2007) won two BBC Radio 3 Awards for World Music (‘Best Album’ and ‘Best African Artist’). The follow-up I Speak Fula (2009) was nominated for a Grammy Award. Jama Ko (2013) was named the Best World Music album in both Mojo magazine and Uncut magazines. The album was also #1 on the 2013 World Music Charts Europe (WMCE), and Songlines Magazine voted Bassekou, ‘Artist Of the Year’ for 2014.

"Kouyaté has updated the dry-gut plucking of the traditional ngoni, adding electric pick-ups, distortion and effects pedals, creating an extraordinary array of sounds from a spindly metallic plinking to a grinding bluesy roar." The Daily Telegraph (UK)

Without question Bassekou Kouyaté & Ngoni Ba has revolutionized the sound and narrative possibilities of the ngoni, the lute-like instrument that is essential to Mali’s Griot culture. Griots are esteemed musician/storytellers whose lineage stretches back centuries. Bassekou was born into this resonant tradition but his relationship to it has been anything but static. From the beginning of his career, through his invention of a previously unheard repertoire built around the melodies and rhythms of four interlocking (and at times electric) ngonis, Bassekou has demonstrated his respect for the past by radically pulling it into the future.

The new album Ba Power is arguably the most inspired and fearless step in this process. It is clearly Bassekou’s most outward looking album, an album where he sharpens his view beyond the eclectic sounds of his Malian homeland and directly engages on his own terms with elements of Rock & Roll (“Siran Fen”), Blues (“Bassekouni”), Jazz (“Ayé Sira Bla”) and other West African musics like Afrobeat (check out the riff on “Waati”).

And where the themes of the songs on Jama Ko often dealt with the internal political crisis in Mali, like the music itself, many of the lyrics on Ba Power focus on the universal and the transformative: “Musow Fanga” (Power of Women”) begins with these lines: Greetings to women all over the world/ Greetings to all African women!/ Being a woman is very important: It is not a meaningless phrase/ Who can say women do not count?

And “Waati” (Time) adopts a worldly, philosophical tone: Be prepared, there is a time for everything: Work in the fields, tending the herds, Be prepared, you have a visitor coming: It is time itself!

Ba Power was recorded in November of 2014 at MBK Studios in Bamako, a studio just down the road from the Kouyaté family home in the hills at the edge of the city. Produced by Chris Eckman (Tamikrest, Aziza Brahim) the album began with Ngoni Ba playing together live in a relaxed, intimate space. The band consists entirely of sons, brothers, nephews and spouses and these family connections and the extensive concert schedule of the past years have given the band an uncanny depth of musical communication. The original sessions were quick, raw and joyful.

But Bassekou didn’t stop there. He made it clear from the beginning of the process that he was eager for the music on the album to intersect with musicians outside of Ngoni Ba, both in Mali and beyond. He specifically sought out instrumental textures he had either never or rarely used, such as trumpet, electric guitar and a drum kit.