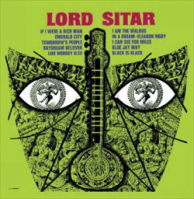 A kitsch classic, a lounge favourite, and very popular in Indian restaurants, Lord Sitar is an album of cover versions as diverse as ‘I Can See For Miles’ and ‘If I Were A Rich Man’ from the sitar of the late great guitar legend Big Jim Sullivan. On its initial release on EMI's Columbia label in 1968 there were rumours that the Lord was in fact George Harrison! This release sees it released on heavyweight green vinyl on the black and yellow 60's Parlophone label.