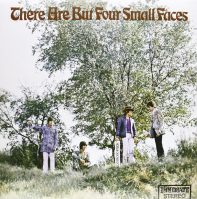 There Are But Four Small Faces

Small Faces debut USA LP released on Andrew Loog Oldham's Immediate Records in 1968 has been newly expanded and remastered in 2014 from the original master tapes for the first time ever!

This definitive edition of 'There Are But Four Small Faces' has been overseen by surviving band members Kenney Jones and Ian McLagan and features previously unseen memorabilia and photography, plus In-depth sleeve notes by Ken Sharp with new exclusive interviews with Olympic Studios engineer George Chkiantz, PP Arnold, renowned photographer Gered Mankowitz and commentary by Eric Carmen ('All By Myself', The Raspberries) and Californian journalist Harvey Kubernik.