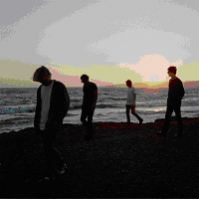 The album comes after a brutally difficult year for the band following the death from brain cancer of their old friend and drummer Jon Brookes last year. Rogers says that they were determined to carry on to honour Brookes' memory - "Jon was adamant that there was going to be another Charlatans record, and you have to put that into your own thoughts."

The band went into their studio Big Mushroom in January 2014 and as Tim recalls "We were aching for the summer when we wrote it. It was freezing and we were trying to write songs that made us happy. “

The result is Modern Nature. Featuring eleven new tracks, including the recent limited edition 7” single and 6 Music A List record ‘Talking In Tones’, the album was produced by The Charlatans and Jim Spencer and mixed by Craig Silvey (Arcade Fire, Portishead). The album features a cacophony of contributors from their three temporary drummers - Pete Salisbury of The Verve, Stephen Morris of New Order and Gabriel Gurnsey of DFA's avant-disco group Factory Floor, to Kate Bushs’ backing singers Melanie Marshall and Sandra Marvin, strings by Sean O’ Hagan and brass courtesy of Dexys’ Big Jim Paterson. Q have already described the album as “ one the finest of their career.”