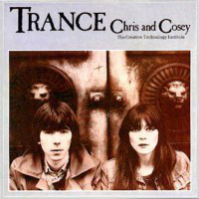 "Trance" is the second in the series of four limited-edition Chris & Cosey vinyl re-releases. This seminal album, a long time favourites with DJs and fans alike, is often cited by many electronic musicians as being influential in contemporary electronic music. Primarily an instrumental album "Trance" covers everything from minimal electro and polyrhythmic sequences to rhythm heavy dance tracks.

Archival press quote: 'No one else currently turning out commercial music has anywhere near Chris and Cosey?s intuitive grasp of the stimulating possibilities of electronic rhythm. Trance is just what it claims to be: a mesmerising chance to reassess the suggestive potential of sound, which in turn, attempts to intoxicate the listener into a reinvestigation of surrounding environments'. - Steve Sutherland - Melody Maker 1982.

CTI are proud and excited to announce the re-release of four classic Chris & Cosey albums from the 1980s: "Heartbeat", "Trance", "Songs Of Love & Lust" and "Exotika". These albums, which have been unavailable on vinyl for 20 years, have been painstakingly remastered by Chris Carter from the original master tapes specifically for these vinyl re-releases and showcase what many consider to be some of Chris & Cosey’s finest works from their eighties period. These limited-edition re-releases are an ideal primer for anyone who isn’t already familiar with Chris & Cosey’s extensive body of work or for those who just want to reacquaint themselves with their unique and often groundbreaking slant on electronica. Each of the four limited-edition albums is available on different coloured vinyl and presented in a specially 'remastered' sleeve which also includes a 12" double-sided insert of archive photos, press clippings and interviews.