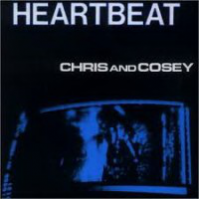 "Heartbeat" is the first in the series of four limited-edition vinyl re-releases from the esteemed Chris & Cosey catalogue. Originally released to much acclaimed in 1981 by Rough Trade "Heartbeat" was the first in a long line of groundbreaking albums by Chris Carter & Cosey Fanni Tutti. This early example of C&C features cut-up sampled voices, Cosey's disto-guitar, Industrial sequences, melodious synths and cinematic sweeps.

Archival press quote: 'There are moments of great beauty like ‘Moorby’ and, equally, many moments of sheer depravity all performed with Kraftwerk’s cultured class and the hypnotic charm and deadly grace of a synthesised cobra'. - Steve Sutherland Melody Maker 1982.
Archival press quote: 'All the world loves a love story… but 'Heartbeat' still has an edge of evil among the extensions of the pair's established scenarios'. - Sandy Robertson - Sounds 1981.

CTI announce the re-release of four classic Chris & Cosey albums from the 1980s:"Heartbeat", "Trance", "Songs Of Love & Lust" and "Exotika". These albums, which have been unavailable on vinyl for 20 years, have been painstakingly remastered by Chris Carter from the original master tapes specifically for these vinyl re-releases and showcase what many consider to be some of Chris & Cosey’s finest works from their eighties period. These limited-edition re-releases are an ideal primer for anyone who isn’t already familiar with Chris & Cosey’s extensive body of work or for those who just want to reacquaint themselves with their unique and often groundbreaking slant on electronica. Each of the four limited-edition albums is available on different coloured vinyl and presented in a specially 'remastered' sleeve which also includes a 12" double-sided insert of archive photos, press clippings and interviews.