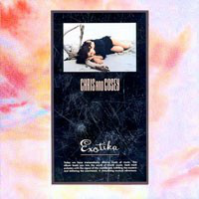 The hugely popular "Exotika" album - originally released in 1987 by Play It Again Sam - includes such Chris & Cosey classics as the crowd-pleasing "BeatBeatBeat", the haunting ballad "Dr. John (Sleeping Stephen)" and the original version of the seminal title track "Exotika", which was adopted as an electronica anthem, most notably on the GOA scene and in the US West and East Coast gay clubs of the 1980s.

CTI are proud and excited to announce the re-release of two more classic Chris & Cosey albums from the 1980s': “Songs Of Love & Lust” and “Exotika”. These albums, which have been unavailable on vinyl for 20 years, have been painstakingly remastered by Chris Carter from the original master tapes specifically for these vinyl re-releases and showcase what many consider to be some of Chris & Cosey’s finest works from their eighties period. These limited-edition re-releases are an ideal primer for anyone who isn’t already familiar with Chris & Cosey’s extensive body of work or for those who just want to reacquaint themselves with their unique and often groundbreaking slant on electronica. Each of the four limited-edition albums is available on different coloured vinyl and presented in a specially 'remastered' sleeve which also includes a 12" double-sided insert of archive photos, press clippings and interviews.