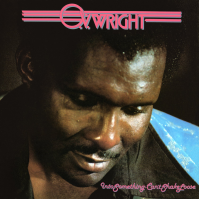 Into Something (Can't Shake Loose)

After a few short spells in jail for narcotic offenses during the mid-'70s, Wright re-emerged in 1977 with 'Into Something (Can't Shake Loose)'. It was his first album for Hi, although producer Willie Mitchell had overseen many of his Backbeat sides from the earlier days. For this comeback, the producer made sure Wright was supported by nothing but the best, from the Memphis Horns and Strings via the rhythm section of Grimes and all three Hodgeses to the background vocals of Rhodes-Chalmers-Rhodes. Even James Brown turned up for piano duties, but let's assume he's just a namesake. Obviously not as strong as the Hi albums Mitchell made with Al Green or Ann Peebles, it's still an example of genuine Southern soul. Highlights include 'I Feel Love Growin', the aforementioned medley, and the gospel-influenced title track with its chilling prologue.