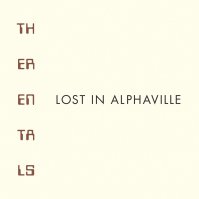 Features Weezer founding member Matt Sharp & Patrick Carney (The Black Keys), Jessica Wolfe, Holly Laessig (Lucius), Ryen Slegr (Ozma) and Lauren Chipman (The Section Quartet). Friends of P from The Rentals Debut Album Hit #7 on Billboard's Modern Rock Chart. Previous two albums have a combined soundscan of over 175K. Lost In Alphaville is the long awaited and highly anticipated followup to The Rentals' landmark albums Return of the Rentals and Seven More Minutes. When listening to Lost In Alphaville for the first time, one can't help but be stoked by the perfect amalgamation of the sonic components: the dense wall of Slegr's punishing guitars, the primal smack of Carney s drums, Sharp's driving, distorted bass and thick buzz of saturated Moog synthesizers all tempered by Laessig's and Wolfe's beautifully lush voices and Chipman's elegant string arrangements serving as an extremely rich foundation for the layers and layers of Sharp's detached, voyeuristically breathy vocals. Sharp created a wall of sound so dense and powerful with arrangements that several songs on the album exceed 200 individually recorded tracks. During this process of arranging, Sharp would slip into what he described as euphoric, psychedelic daydreams. Sharp says, If you can't whip yourself up into a state of full-blown rapture while you re creating, I don't really see the point of making music. Lost In Alphaville is a true sonic achievement, The Rentals' best album by a mile, a blissfully righteous storm of broken-up guitars, buzz-saw synthesizers, brutally, barbaric rhythms which crumble and crackle against a wash of strings, male and female voices all blending into 10 perfectly formed pop songs. Not only have The Rentals completely surpassed their first two albums, but Sharp just might be putting forward the best work of his entire career.