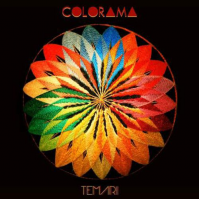 TEMARI follows Coloramaâ€™s acclaimed 2012 release, Good Music and picks up where they left off, brimming with ideas and sounds. Resolutely eclectic to their core, Colorama continue to explore new styles whilst maintaining a consistency of songwriting that is never less than affecting. Recorded between Colorama-head-honcho Carwyn Ellisâ€™ place in Wales and our West Heath Yard Studios in London (with Edwyn Collins and Sebastian Lewsley again at the helm), TEMARI is a ray of Welsh sunshine via California and the Pacific. As ever, Colorama take in an eye-watering variety of styles and throw them back at you with dazzling versatility â€“ psychedelia, baroque pop, yacht rock, electropop, bubblegum, garage rock, folk-funk and fuzz-soul are all dipped into with effortless ease, and always with Carwynâ€™s gorgeous voice as our guide. Think Steely Dan meets Beck meets Isley Brothers meets Left Banke meets Soft Cell meets Steve Miller meets Air meets John Barry meets Devo and you may have an idea â€“ a daft concoction that shouldnâ€™t work but somehow it does and with flying colours. On TEMARI Colorama manage to absorb these disparate influences and give us a sound for 2014 which is very much their own.

And the title? â€œNo, itâ€™s not Welshâ€, says Carwyn, â€œitâ€™s Japanese. An old folk toy. Thereâ€™s a picture of a Temari on the cover. Itâ€™s an embroidered little ball that traditionally, the maker would give someone as a gift to wish them well â€“ the amazing colours and threads are intended to wish the recipient a brilliant and happy life. I like the idea that someone would go to such lengths to craft something so beautiful and heartfelt for another. And thatâ€™s my intention when I make my music, believe it or not. A lofty parallel to make perhaps, but youâ€™ve got to aim highâ€.