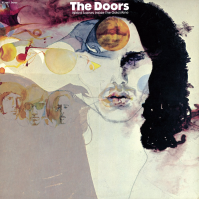 Weird Scenes Inside The Gold Mine

With an intoxicating, genre-blending sound, provocative and uncompromising songs, and the mesmerizing power of singer Jim Morrison's poetry and presence, The Doors had a transformative impact not only on popular music but on popular culture. In the decades since the Doors' heyday, the foursome has loomed ever larger in the pantheon of rock - and they remain a touchstone of insurrectionary culture for writers, activists, visual artists and other creative communities.

Weird Scenes was originally released in 1972 and is long out-of-print. It was the first compilation to be released after Jim Morrisonâ€™s death in 1971, and features some of the Doorsâ€™ best-loved hits alongside two stellar b-sides: â€œWho Scared Youâ€ which appeared in March 1969 as the flipside to â€œWishful Sinful,â€ and a cover of Willie Dixonâ€™s â€œ(You Need Meat) Donâ€™t Go No Furtherâ€ which was paired with the smash â€œLove Her Madlyâ€ in 1971.

The 22 songs that appear on the collection provide a wide-ranging introduction to the music recorded between 1967 and 1971. The bandâ€™s longtime engineer Bruce Botnick remastered the music heard on this reissue.