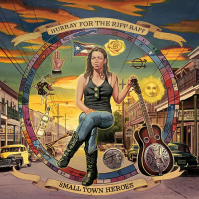 New Orleans is a tricky place to put into song. To a degree matched only by California and New York City, the Big Easy makes and is made by the American geographical zeitgeist, and has captured the imaginations of songwriters since its founding. It seems massively daunting, if not impossible, to tell a story about Storyville that hasn't been told before.

Small Town Heroes, 's sixth album, is about New Orleans. But it's not about the Crescent City of yore. It's about Alynda Lee Segarra, the band's founder and sometimes sole member, missing the bar where she can play her guitar quietly in the corner. It's about the place where she eats dinner on Monday nights. Segarra's clear-eyed, street-level portrait of her city demonstrates exactly what's most valuable and remarkable about Hurray for the Riff Raff's music: its commitment to truth-telling.