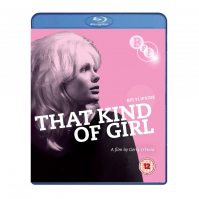 THAT KIND OF GIRL

In 1960s London, a beautiful continental au pair finds herself wrestling with the affections of an earnest peace-protestor, a dashing young toff and a roguish older man. But fun and freedom turn to shame and despair when she finds that her naivety has put her lovers, and their partners - including the well-meaning Janet (played by Big Zapper's Linda Marlowe, in her first role) - at risk.

Stylishly shot in crisp black and white, and set against a backdrop of smoky jazz clubs, 'Ban the Bomb' marches, and evocative London locations, this finely-tuned cautionary tale was the directorial debut of Gerry O'Hara (All the Right Noises, The Brute), and is presented in a new high-definition transfer.

All films remastered to High Definition
The People at No. 19 (J.B. Holmes, 1948, 17 mins): an intense and effective melodrama which explores the themes of adultery, sexual hygiene and pregnancy from the perspective of an earlier era
No Place to Hide (Derrick Knight, 1959, 10 mins): a snapshot of the first 'Ban the Bomb' march to Aldermaston
A Sunday in September (James Hill, 1961, 27 mins): a compelling documentary, from the director of Black Beauty, about a nuclear disarmament demonstration in London, with Vanessa Redgrave, Doris Lessing and John Osbourne
Robert Hartford-Davis interview (1968, 14 mins): That Kind of Girl's producer discusses his film career and production methods
Extensive illustrated booklet featuring essays from novelist Cathi Unsworth and director Gerry O'Hara