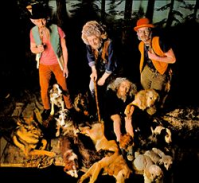 This Was is the debut album by the rock band Jethro Tull, released in 1968. Recorded at a cost of only Â£1200 GBP, the album received generally favourable reviews and sold well upon its release. In the documentary film of the Woodstock Festival, portions of the songs "Beggar's Farm" and "Serenade to a Cuckoo" may be heard on the PA system, indicating the level of notice the album achieved in the United States. The album reached number 10 on the UK Album Chart and number 62 on the Billboard 200.