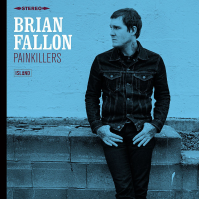 Fallon began writing songs for what would become Painkillers before The Gaslight Anthem's 2014 release, Get Hurt, thinking there would be more time off before Get Hurt. He wrote new material and had some from another band of his, Molly and the Zombies, to use for Painkillers already. When the Get Hurt project started, Fallon put the new songs aside to focus on The Gaslight Anthem, realizing that the new songs he initially thought could be The Gaslight Anthem songs would not fit well with the direction the band was going with for Get Hurt. The band knew there would be a hiatus before it was made public so Fallon began writing more songs and put together a plan for the solo release. Following the announced hiatus of The Gaslight Anthem in July 2015, Fallon entered a Nashville studio to record Painkillers with producer Butch Walker, who also plays guitar on the album. Catherine Popper plays bass and Randy Schrager plays drums on the album