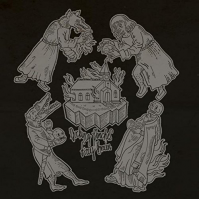 Norwich punkers present third, vital album 'Fizzy Brain' - their first for Xtra Mile Recordings. Xtra Mile Recordings are excited to announce a brand new signing for 2016 - Ducking Punches. Originally the solo acoustic songs of vocalist and guitarist Dan Allen, Ducking Punches are now a punk / rock quintet. Hailing from Norwich, the band has nearly 1,000 shows under their belt, including a European tour in 2014 with Frank Turner and Andrew Jackson Jihad, as well as festival sets at Reading and Leeds, Download, Groezrock, FEST and support slots alongside The Hold Steady, The Menzingers, Teenage Bottlerocket, Franz Nicolay and Leatherface. With two albums under their belt, the self-titled debut from 2010 and Dance Until You Sleep last year, they've collectively cranked the vitality and volume while building melody, texture and drama with violins, gang vocals and amplification. But they've never lost the pace and dynamics that brought Ducking Punches to such live acclaim. New material keeps that soaring course, songs that are as stirring as they are a call-to-arms, as blaring and exhilarating as they can be heart-rending and tender. "Ducking Punches are best witnessed live - there can't be many bands that threaten to blow The Hold Steady off stage as they did." Outline Magazine "This record exudes the spirit, and true meaning of punk from the core of the band. This is not a folk punk record that's full of jigs about drinking, or even filled with protest songs. 'Dance Before You Sleep' is nine tracks of well-written, cohesive songs that are straight from the heart, which is exactly the place that punk should come from." Punktastic on Dance Before You Sleep. "Ducking Punches... delivered a frankly majestic set of emotion-soaked punk rock. Not only were the songs the band played hugely passionate and real, but it was clear that they absolutely poured their hearts into their on-stage performance too." - The Punk Archive. Album features Xtra Mile Recordings star Frank Turner on guest vocal.