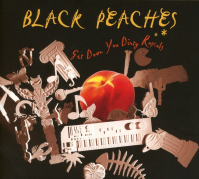 Get Down You Dirty Rascals

Following the recent unveiling of Black Peaches debut single, 'Fire and A Water Sign', 1965 Records release the debut album 'Get Down You Dirty Rascals'. Black Peaches is the new project of Rob Smoughton, probably best known as a longtime member of Hot Chip and Scritti Politti, while his alter-ego Grovesnor has released a number of critically acclaimed albums. A midway point between the swamp and the tropics, Black Peaches' music is gloriously loose-limbed and strung-out a psychotropic stew of country boogie, spiritual jazz and funk. With slide guitars, Latin percussion and shimmering keyboards, the Peaches sound is a cinematic experience, the soundtrack to a bar fight at the country disco or an incantation of the black arts. At other times they swagger with the easy confidence of Little Feat, Manassas or Dr John to create a pulsating, unwinding groove for a hot summer's day where no one's in too much of a hurry. Black Peaches demanded a band format so Smoughton sent his initial demos to musicians he fancied roping in, like Grosvenor's live drummer Nick Roberts and Charlie Michael (The Severed Limb, Shock Defeat), a master of Brazilian percussion. Smoughton had played with bassist Susumu Mukai in (Hot Chip frontman) Alexis Taylor's live band. Duelling guitarist Adam Chetwood is a fellow country and jazz fan and plays pedal steel too. Thomas Greene (Cold Specks) on keyboards completes a consummate line-up that added ideas to Smoughton's demos, which he then took away and wrote more parts for. Inspirations include 1970s Nashville combo Barefoot Jerry and their guitarist Mac Gaden - a combination of Southern soul and country coming together, with Caribbean or South American music seeped in. Steven Stills' first post- Crosby Stills Nash & Young ensemble Manassas were a blueprint in terms of Black Peaches' line-up, with percussion and pedal steel. Then, from Brazil, the rhythm section of Baden Powell Sambas' 1966 album 'Os Afro Sambas' and the double guitar attack of the psych-tinged Novos Baianos, alongside Chicago's funky post-rockers 5Style and Krautrock legends Can.