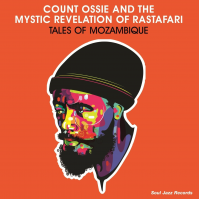 Soul Jazz Records are releasing Count Ossie and The Mystic Revelation's seminal 1975 album Tales of Mozambique in an expanded double album/single CD/digital format, fully remastered and with the inclusion of two bonus rare single-only tracks, full sleevenotes, exclusive photographs and interview. Count Ossie is the central character in the development of Rastafarian roots music, nowadays an almost mythical and iconic figure. His importance in bringing Rastafarian music to a populist audience is matched only by Bob Marley's promotion of the faith internationally in the 1970s. Count Ossie's drummers performed on the first commercially released single to integrate Rastafarian traditional music with popular music: the vocal group The Folkes Brothers' groundbreaking song 'Oh Carolina', recorded for producer Prince Buster in 1959. In 1966 his drummers greeted the momentous arrival of Haile Selassie at Kingston airport. His legendary jam sessions in his Rastafarian compound up in the hills of Wareika, Kingston, are famous for the many Jamaican musicians who attended including The Skatalites players - Roland Alphonso, Don Drummond, Johnny Moore, Lloyd Knibbs - and many others. The Mystic Revelation of Rastafari formed in Kingston, Jamaica, in 1970, a union of Count Ossie's Rastafarian drummers - variously known as his African Drums, Wareikas or his Afro-Combo - and the saxophonist Cedric Im Brooks' horns group, The Mystics. The Mystic Revelation of Rastafari are the defining group in bringing authentic Rastafarian rhythms into the collective consciousness of popular music, their unique music is at once rooted in the deep traditions and rituals of traditional drumming alongside a forward-thinking, even avant-garde, artistry influenced by the likes of John Coltrane, Sun Ra, Pharoah Sanders and other pioneering African-American jazz artists radicalised and charged by the civil rights movement of the 1960s. Tales of Mozambique is a truly unique and fascinating ground-breaking album.