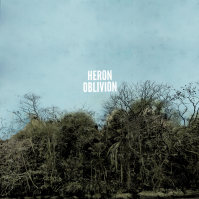 Pastoral pummel. Listening to Heron Oblivion’s album feels like sitting in a lovely meadow in the shadow of a dam that’s gonna heave-ho’ any minute. Members of this new San Francisco combo have put in time in both raging and relatively tranquil psychedelic sound units—this is the premise and the synergy behind this very unique and special new album.

On the West Coast side, Ethan Miller and Noel Von Harmonson were together in the mighty Comets on Fire, who spent a large chunk of the mid-2000s playing unbridled, blistering rock worldwide, fueled by a steady diet of amphetaminized Crazy Horse, High Rise, MC5, Chrome, and Fushitsusha. They were molten and melting down at all times—with twin-guitar blowtorch jams inflected with Noel’s careening electronic infusions, and songs and structures holding on to the wheel (barely) while destruction ensued. Noel did time afterwards with Sic Alps and Six Organs of Admittance, while Miller settled into a new level of interactions with Howlin’ Rain and Feral Ohms. Charlie Saufley resided at the psychedelic pop fringes with his band Assemble Head in Sunburst Sound (kindred spirits to Comets to be sure.) He was joined in California by Meg Baird of Philadelphia’s Espers. The East Coast connection, Baird was an already-established leading light in the modern psych-folk canon both in Espers and as a solo artist (most recently releasing the gorgeous Don’t Weigh Down the Light LP on Drag City,) as well as original drummer for Philly’s post-hardcore degenerates Watery Love.

Ethan and Noel were loosely jamming in an improvisational unit called Wicked Mace at this point. Via osmosis, Charlie and Meg came floating in for weekly hangs that still resided in a somewhat free zone. “We just did pure improv’ for a few months under no pressure to ‘be anything’ or ‘be a band’”, says Miller, “I think Noel and I sort of pushed for the idea of Meg on drums, me on bass, and Noel and Charles on guitars just to mix it up a bit, get outside our usual mold a little.” Though Noel and the newfound rhythm section took roles with instruments they were familiar with—but not particularly known for—ideas bubbled up quickly, and each member contributed to the songwriting process. “As expected, Charles and Noel had killer guitar chemistry, incredible fuzz sounds, symbiotic interplay,” Miller recounts. Though a multitude of other parallel musical projects kept the pace slow for the foursome, it moved steadily forward—and down paths much less trodden and familiar for the players involved. It was something new, unfamiliar, and invigorating to say the least. Eventually, seven songs were tracked at Eric Bauer’s San Francisco studio “The Mansion,” and the results are stellar.

Three shades of light run through Heron Oblivion: Baird’s rich, beautiful vocal approach, the locked-horns bass and drums of her and Miller’s streamlined-but-motorik rhythm section, and a twin guitar tapestry that both aligns with the dreaminess of the songs and crackles out of containment to froth over the rim. It’s a seamless but pronounced thing: “Oriar” sports dramatic spires of solos that fly high out of the gate, slowly settling in to lilting verses then exploding again, “Rama” drifts like an Opal/Fairport wedding with more tumbling, syrupy electric lines all around.

Meg’s gorgeous singing resides within an untouchable domain and never struggles, nor has to combat the avalanche of guitars that ebb and flow. The only other record this could be remotely compared to maybe is the Slap Happy Humphrey record on Japan’s Alchemy label years ago, where female vocal melodies combat sick walls of noise guitar. But in this case a definite West Coast style reigns—where elements meld rather than stand as opposing black-and-white walls: Even the heights of guitar destruction on Heron’s “Faro” build steadily and organically from the beginning to end.

The group first properly gigged in April of 2014 opening for War On Drugs. They finished the record independently, then inked a deal with Sub Pop in early 2015. Most recently they toured the West Coast with Kurt Vile and Cass McCombs.