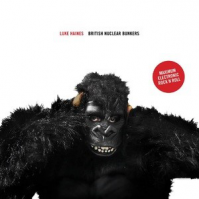 The album was recorded using entirely analogue synthesizers. Maximum Electronic Rock and Roll! A new concept album set in the future where Great Britain has retreated to a vast and secret network of abandoned nuclear bunkers and prays to a piece of silverware, referred to as the 'New Pagan Sun'. Luke Haines will be converting Bush Hall into a nuclear bunker for a Maximum Electronic Rock and Roll show on October 21st. He will then be touring nuclear bunkers around the UK.