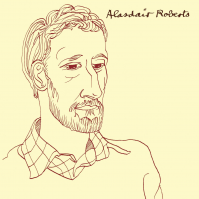 The brand new album from Scottish songwriter, guitarist and singer Alasdair Roberts. His self titled album represents a new phase in an essential and ever-evolving discography; it will please long-term followers and new listeners alike, and stand with his other records as a testament in time to as pure a talent as this era has seen and heard.

The making of Alasdair Roberts found Alasdair back at Glasgow's Green Door Studio, where he previously made his 2009 album, Spoils. Alasdair Roberts has a warmer feel than A Wonder Working Stone, partially the result of having been recorded in the analogue domain by Green Door's masterly house engineer Sam Smith. In the main however, the rich ambiance throughout the album is evidence of yet another tremendous leap in Alasdair's writing, playing and singing. The six years since Spoils seem like a much greater expanse of time for all the growth shown on the four albums between then and now. The decision, then, to self-title this album hints at the idea of the artist as having achieved, in Jungian terms, complete 'individuation.' Evident as well upon listening is the sound of deep contentment in Alasdair's playing and singing (not to be confused with gratuitous delusions of self-satisfaction). Moreover, this music is projected from a place of confidence, where what is needed for the music comes naturally, instinctively and as needed.

A Wonder Working Stone was an expansive double album, featuring some thirteen musician friends working through complex arrangements of ten sprawling epics written in the syncretic style Alasdair debuted on Spoils. By contrast, Alasdair Roberts' ten songs are sparse, intimate and concise. The focus throughout is on Alasdair's deft acoustic fingerstyle guitar and his voice. The songs are variously elliptical and gnomic, direct and personal, romantic and tender. There are occasional guest appearances from fellow Glasgow-dwellers Alex South (clarinet), Donald Lindsay (tin whistle) and singing quartet The Crying Lion (Alex Neilson, Lavinia Blackwall, Harry Campbell, Katy Cooper), always to great dramatic effect. In response to the economy of the arrangements, Alasdair's voice pitches down on occasion, enhancing the close feeling of this album - an environment where even the sounding of percussive stick-clicks signals a dynamic sonic shift. Alasdair has always delighted in a good, dark set of traditional ballads - the kinds of songs which address human mortality in all its grisly manifestations - but even in the relative isolation of this almost-solo set, Alasdair shows no sign of the misanthrope; his advocacy for the fellowship of man is always unshakeably present.

Alasdair Roberts has had a remarkable career to date, starting his music-making in the mid-nineties under the band name Appendix Out and collaborating widely with many musicians from within and without the traditional music tradition over the intervening twenty years. Alasdair has toured incessantly far and wide during this time, working as well with artists from other disciplines such as filmmakers, poets and puppeteers. The resulting performances, expressions and actions are his life's work.