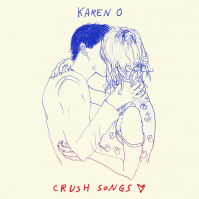 Recorded in 2006 and 2007, the record is an intimate collection of lofi, bedroom recordings in the vein of Karen’s Oscar-nominated “The Moon Song.”

“When I was 27 I crushed a lot,” says Karen of the new record. “I
wasn't sure I’d ever fall in love again. These songs were written and recorded in private around this time. They are the soundtrack to what was an ever continuing love crusade. I hope they keep you company on yours.”

Cult label founder Julian Casablancas says, “So excited, lucky and proud to be involved with such a classic album—I just wanna listen to it all day. Karen is an all-time great.”
Karen O is the frontwoman of Yeah Yeah Yeahs. In addition to Karen’s recent Academy Award nomination for Best Original Song for “The Moon Song,”

Yeah Yeah Yeahs have been nominated for three Grammy awards.

The band has released four studio albums; 2003’s Fever to Tell,
2006’s Show Your Bones, 2009’s It’s Blitz and 2013’s Mosquito, to incredible critical acclaim and has played countless festivals including Glastonbury, Coachella, Lollapalooza and Bonnaroo and curated its own All Tomorrow’s Parties.