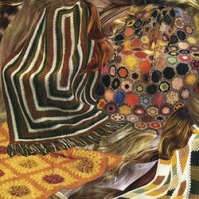 After taking on the Herculean task of releasing three albums in 12 months, a lot of musicians might take some significant time off before their next release - but San Francisco garage-rock wunderkind Ty Segall doesn't work like that. After releasing 'Twins' just last October (a solo LP that followed two collaborative records, one with his touring band, the other with White Fence), Drag City release 'Sleeper'. The album finds Segall returning to the more lo-fi acoustic side.