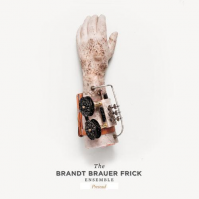 The German group are known for blending live performance and club-influenced composition, and Mr Machine shows them pushing the envelope more than ever: having expanded into a 10-piece ensemble, they are now just about 100% acoustic. "On You Make Me Real, we still used some effects and more synths, whereas Mr Machine is completely unplugged, except for the Moog synth, which is amplified through a bass guitar amp," says Paul Frick. "You Make Me Real was still 'produced.' On Mr. Machine there's nothing like that at all."

To fill out the rest of the ensemble, the core trio cherry-picked members of Berlin's jazz and contemporary classical scene, including artists from Kaleidoskop, Formelwesen, Adapter and Ensemble Modern. Producer and vocalist Emika makes an appearance on the track "Pretend." According to a press release, the album was recorded over five "very long and intense" days. Some of the songs are new, others are reinterpretations of the group's past work, including their breakthrough single "Bop."