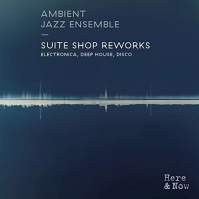 The reworks album was mastered by Guy Davie on an early 70s EMI Lagos desk the same one used for many Fela Kuti. Guy's Electric Mastering work with Jon Hopkins, FKA Twigs, Jamie T and many more. Suite Shop Reworks are upbeat, dancefloor and electronic versions of the chilled orchestral originals with the addition of some vocals