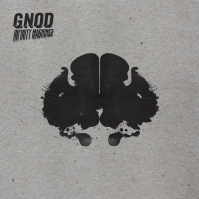 Slaves to no-one but their own psychic co-ordinates. Gnod continue their fearless voyages down pathways unknown. Operating from their base camp of Islington Mill - a venue, art-space and liminal zone in Salford - the band have stubbornly pursued their own free-flowing aesthetic since their formation. 'Infinity Machines', their fifth release for Rocket Recordings, and the latest for this prolific outfit in a vibrant and diverse history, is no less than a pinnacle of achievement for a band who exist beyond all or any reductive genre pigeonholes, not to mention beyond the constraints of the everyday. A triple-album, it explores a unique vision informed by experimental elan and metaphysical intensity. In an era in which the word 'psychedelic' too often tends to signify a reductive and retrograde rag-bag of second-hand shapes, it was in Gnod's nature to forge forth in search of new and expanded sonic terrain. At first, this led them to pursue a purely electronic sound in the live arena, yet as they knuckled down to chronicle this expansion and experimentation for posterity, it became clear that a mixture of live instrumentation and binary audial research would be the path that would prove most fruitful. Thus began the process that would ultimately produce these recordings, and a far-reaching mission which would result in uncanny crepuscular atmosphere locking horns with sinister electronic intensity.'Infinity Machines' traverses between and beyond a variety of different headspaces from the bleak to the beatific - yet whilst touching on nocturnal jazz, soothing yet unsettling ambience, menacing aggro-industrial battery and opiated bliss-out alike, it's shot through with an undercurrent of fiery countercultural zeal and small-hours revelation, as if the hive-mind of their home collective had manifested itself on six sides of wax. Tracks were put together from an initial blank canvas, and as the band themselves emphasize, "We got pretty tactical in the approach. We have certainly noticed that the emphasis has shifted from full on 'throw everything at it' Gnod vibes to a more stripped spacious sound which was not fully intentional but more of a natural progression" Spoken word contributions, many from Islington Mill inhabitants and seers, vie for attention with gridlike and vicious beats, synapse-shifting modular synthesis, field recordings. and even the hitherto unheard appearance of saxophone and electric piano textures. As Gnod put it. "We really like the idea of a Rhodes and sax on a Gnod record, because to most people those instruments are pure cheese, but we think they are pure soul" This 110-minute opus, fearless in spirit and limitless in scope, documents the unstoppable motion of an iconoclastic force beyond the comprehension of the unenlightened. A transmission from a collective consciousness that touches on universal truths and dark powers alike, and a bold new chapter in this mercurial collective's glorious passage into the unknown. Yet now as ever, In Gnod We Trust.