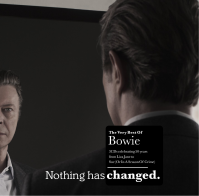 NOTHING HAS CHANGED released on November 17th collects together for the first time the definitive collection of Bowie’s music from 1964 to 2014. It will be released on 20 Track Double 180g heavyweight vinyl, 39 track double deluxe CD and super deluxe 3CD versions. It also features some previously unreleased material as well as tracks making their debut on CD.

Fifty years on from his first recordings, David Bowie continues to be at the vanguard of contemporary culture as a musician, artist, icon and a nonpareil to generations of writers, artists and fashionistas. He remains to be a unique presence in contemporary culture.

•SUE (Or IN A SEASON OF CRIME) the new single from David Bowie. SUE was recorded this Summer in New York with the Maria Schneider Orchestra and produced by Bowie and Tony Visconti. Maria Schneider, who also arranged the track, has won numerous Grammies and is the leader of one of the best big bands in the USA. The song features Donny McCaslin as soloist on tenor saxophone and Ryan Keberle soloist on trombone. Bowie wrote the lyrics for SUE and collaborated on the music with Maria Schneider.

•LET ME SLEEP BESIDE YOU was first released on THE WORLD OF DAVID BOWIE in 1970. In 2000, it was re-recorded for inclusion on the unreleased TOY album and has remained in the vaults until its inclusion on NOTHING HAS CHANGED.

•SHADOW MAN is a famous still unreleased outtake from 1971, the version on NOTHING HAS CHANGED is a re-recording that was made for the unreleased TOY album and first appeared as a b-side on a swiftly deleted single in the early 2000s.

•LOVE IS LOST (HELLO STEVE REICH MIX BY JAMES MURPHY FOR THE DFA EDIT) this edited version of critically lauded remix by James Murphy is making its CD premiere.

•YOUR TURN TO DRIVE is making its CD debut, it was originally offered as a free download to customers who ordered their copy of the REALITY album online.

•WILD IS THE WIND (2010 Harry Maslin Mix) was previously only released on the audio DVD in the Station To Station Deluxe box set. This is its debut on CD.

•YOUNG AMERICANS (2007 Tony Visconti mix single edit) The unedited version of the song was previously only released in 5.1 mix on the Young Americans Special Edition CD/DVD. This single edit is previously unreleased.

•ALL THE YOUNG DUDES this is a previously unreleased stereo mix of David’s own version of the song given to, and a hit for, Mott The Hoople.

•LIFE ON MARS? (2003 Ken Scott Mix) this version was previously only released on the 40th anniversary 7” picture disc; this is its debut on CD.

Jonathan Barnbrook who worked on THE NEXT DAY, HEATHEN and REALITY albums has designed the artwork for NOTHING HAS CHANGED, each format has its own specific sleeve. Of the artwork Barnbook says, “A different image appears on each use. The linking theme is Bowie looking in the mirror. Something which was a strong enough ‘archetype’ to provide an immediately identifiable visual link but make it clear this was a collection of songs through the experience of one persons life, not necessarily a specific concept or period of time as albums tend to be”.