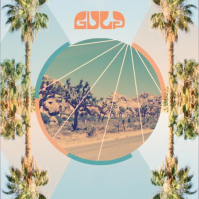 The debut album by the new band formed by Super Furry Animalsâ€™ Guto Pryce and his wife Lindsey Leven!