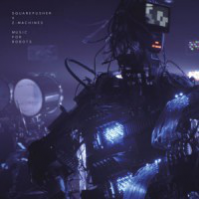 A five track EP composed by Squarepusher and performed by the three robots that comprise the Z-machines.

In 2013, a team of Japanese roboticists were assembled with the challenge of creating a music-performing system that was beyond the capabilities of the most advanced musicians - Z-machines were the result. The roboticistâ€™s music producer, Kenjiro Matsuo, and his team, invited a number of Japanese composers as well as Squarepusher to develop music specifically for the project.

The opportunity to explore the compositional possibilities of a guitarist with 78 fingers and a drummer with 22 arms was a temptation impossible to ignore. The resulting â€˜Sad Robots Goes Funnyâ€™ was a poignant and highly praised piece, composed and produced by Squarepusher and performed by Z-machines.

Squarepusher approached Matsuo-san with a view to further investigate the possibilities of the collaboration. This led to additional pieces being created, involving an intense four weeks of composing, then two more months of transferring and adapting data, various technical hurdles and the eventual recording of â€œMusic For Robotsâ€.