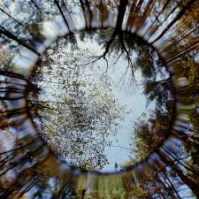 Martin Duffy has always been thought of in relation to other bands - he didn't really do things on his own. From Felt in 1985 through to Primal Scream today, he was always a part of someone else's sum. It was Duffy - like Prince and Madonna he's legendary enough to just go by one name - who was the lynchpin in the continuation of The Charlatans after Rob Collins's tragic death - finishing recordings and stepping in until a new keyboard player could be found.

Throughout all that time, he worked on ideas of his own but had never played anything to anyone. He joined Tim Burgess's solo band for a tour in 2012 not long after Tim had started his own label, O Genesis. Somewhere near motorway services on the M4, close to Reading they drove past an abandoned car on the hard shoulder that was on fire. It was seen as a very oblique sign that O Genesis should release the first solo material by Martin Duffy.